Comparing CO2 Forcings and Temperature in the Geologic Past 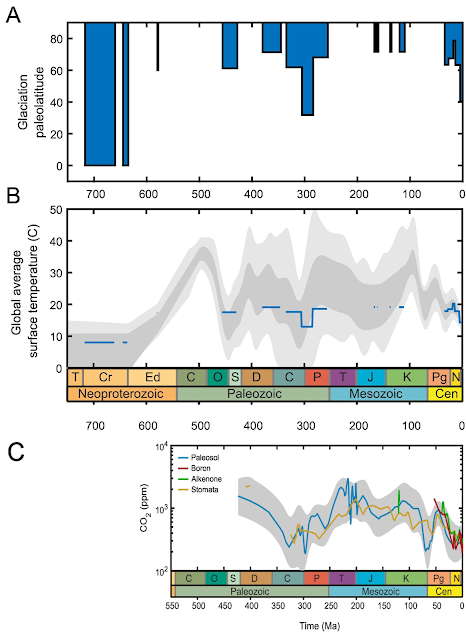 For over 20 years, geologists have attempted to model CO2 concentrations across the geologic past. Geologists have sufficient proxy evidence to reconstruct CO2 concentrations for significant parts of the last 420 million years, but models can be useful to infer concentrations when proxy evidence is weaker or lacks sufficient resolution. While "box" models like COSPE or GEOCARBSULF  confirm broad correlations between CO2 and global temperatures , the correlation may be improved if the models take better account of tectonic processes affecting CO2 concentrations. Evaluation of Proxies for CO2 and Temperatures In a study published three years ago, Mills et al 2019 evaluated the performance of the COPSE and GEOCARBSULF "box" models for CO2. The latter model is the most recent update to the GEOCARB model that is frequently misused in contrarian graphs of CO2 and temperature - GEOCARBIII was published in Berner 2001 and is often plotted with an old schematic of tempera
Post a Comment
Read more 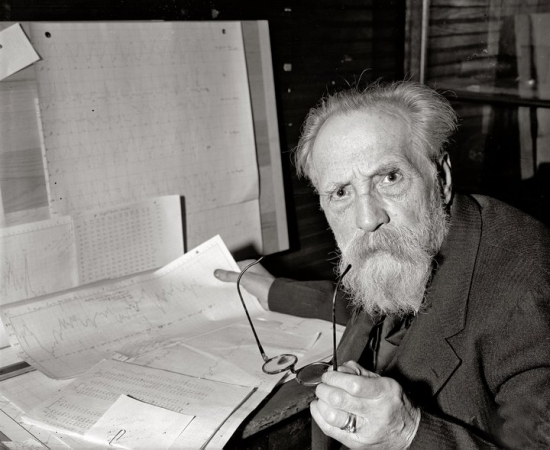 Recently I came across a new word, "bulverism." The term was coined by C.S. Lewis to describe what is broadly similar to what Antony Flew called the "subject/motive" shift. Strictly speaking, it's a form of the logical fallacy, ad hominem - attacking the author instead of the argument. Bulverism takes the the following form:      A. Assume your opponent is wrong      B. Explain why your opponent is wrong Bulverism often springs up in debates that are highly contentious - that is, when people have strongly held beliefs that are also strongly opposed by others. In highly contentious debates, we tend to react in terms of our contempt for the other side of the debate (and even the person that holds the view being opposed). Lewis describes bulverism with an example from math, where Ezekiel Bulver's father claims that the sum of any two sides of a triangle must be longer than the third, and his wife says, "Oh, you say that because you are a man." Ezekie
Post a Comment
Read more 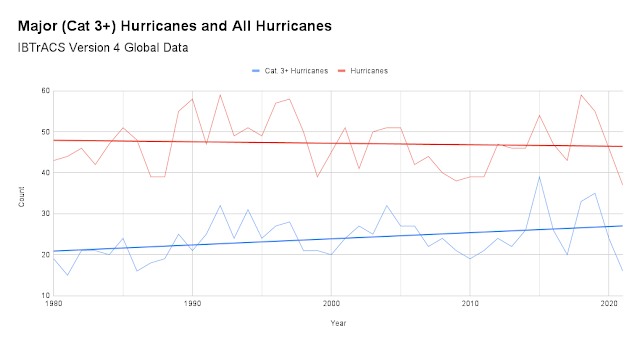 In a previous post , I covered the distinction between detection and attribution. These are normally considered sequentially. First you detect a signal above natural variability, then you examine if some portion of that signal can be attributed to human activity. The previous post shows that the two are statistically independent from each other, so there is no need to limit attribution studies to signals that are detectable above natural variability. This distinction and clarification I think is important in discussions of tropical cyclone trends. While trends are clear since 1980, the longer term record (since ~1850-1900) is less clear due to selection biases arising from our increasing ability to detect tropical cyclones. This makes detection difficult long term, but that doesn't necessarily mean that scientists can't also examine ways in which human activity is affecting tropical cyclone trends. Detection in the Satellite Record (Since 1980) The satellite record provides us
Post a Comment
Read more

There is growing evidence supporting the conclusion that AGW is already having an effect on extreme weather events, and those impacts are not beneficial to humanity or to the earth's ecosystems. But the process of arriving at those conclusions is complex, and different types of extreme weather are affected by AGW in different ways. While there is a clear (and obvious) link between AGW and extreme heat, heatwaves, droughts, and flooding, the effects of AGW on other extreme weather are far more difficult to determine. For instance, it may be that AGW is only affecting which parts of the US are more likely to be affected by tornadoes without impacting their frequency. The effect of AGW on Tropical Cyclones (TCs) has been extensively studied, and it appears that there is growing evidence that there are clear connections between AGW and hurricane activity, but I see many reported connections (or lack of connections) misstated by the media, politicians and "think tanks." In ord
Post a Comment
Read more

The Physics of the Climate Response to Doubling CO2 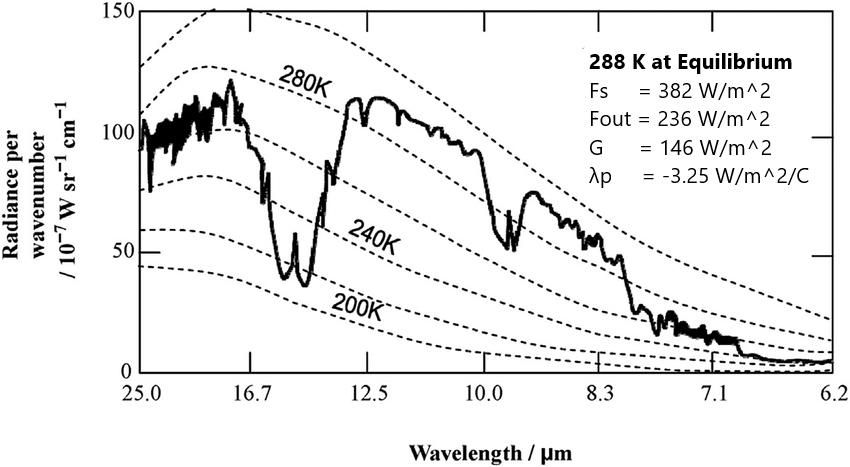 In a recent post , I provided a standard calculation for the effective temperature of Earth (the earth without GHGs) to be 255K. This calculation used the temperature and radius of the sun, the earth's distance from the sun, an emissivity of 1 and albedo of 0.3. So, if the earth had no atmosphere, the average surface temperature of the earth would be about -18 C. However, we know that currently, the earth is about 33 C warmer than this; it's ~288 K or 15 C. The 33 C difference is caused by the greenhouse effect, and the above diagram of the Earth's emission spectrum illustrates how this is accomplished. Greenhouse gases slow down upwelling LW radiation escaping into space, trapping heat in the troposphere, such that the surface warms in response.                                 Climate at Equilibrium to 288 K Current Conditions I decided it would be fun to do a little thought experiment to show how this works given the physics accounting for various fluxes that influence th
Post a Comment
Read more 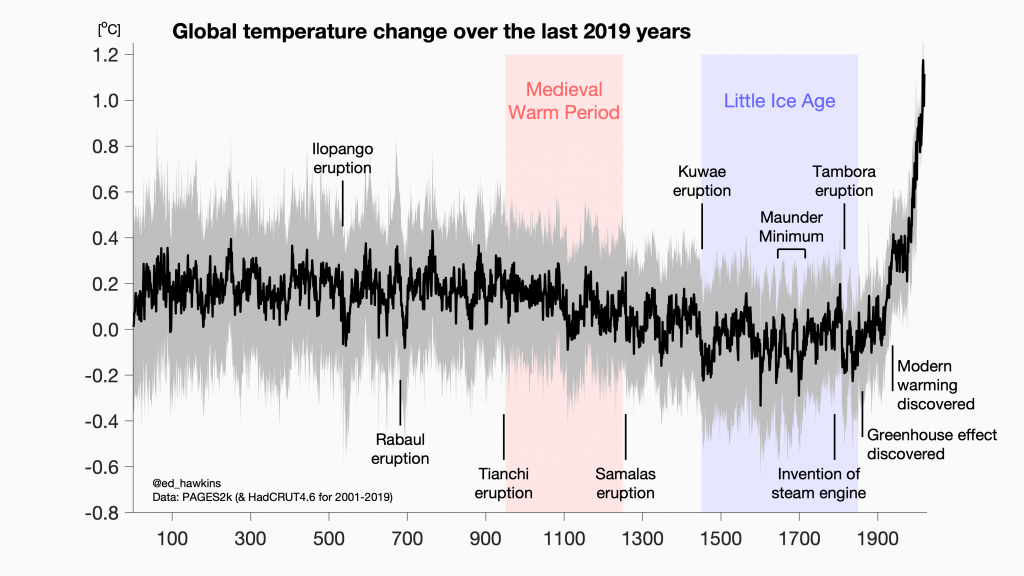 Pages 2K Reconstruction of Global Temperatures Replicating MBH98/99 In a previous post , I wrote an initial review of Gregory Wrightstone's Book, Inconvenient Facts. We began to see that Mr. Wrightstone's book was pretty low on facts and high on convenience - that is, Wrightstone's claims would be very convenient for us if we believe him, since if there is no problem, we have no compelling reason to fix a non-existent problem. That post covered only the first two chapters of his book. Chapter 3 is supposed to contain more inconvenient facts about temperature, but what we get is a lot of misinformation about temperature based on 1) the rejection of scientific evidence about temperature and 2) the confusion of global temperatures with local temperatures, including 2a) Central England and 2b) the Greenland summit, and 3) the misuse of a terrible proxy reconstruction. Confusion About Proxies Mr. Wrightstone (somewhat) correctly observes that, if global (or Northern Hemisphere)
Post a Comment
Read more
More posts

I am not a scientist or an expert in any scientific field. I'm just a guy who likes to read scientific literature about the natural world and convey that information here. I have a B.S. in Geology, and so I generally approach the natural sciences and issues of the environment, conservation, and climate change from that perspective. Please do not just accept what I say here because I say it, as if I'm some sort of expert. I will always provide the sources for the things I say, and I would highly encourage you to check up on those sources before conveying to others what I say here. And please feel free to provide helpful insights, constructive criticism, and additional expertise to what I've said here in the comments. I have no patience for trolling. Mean spirited or highly conspiratorial comments will be deleted. Right now I'm moderating every comment. Eventually, I may move to another system, but for now, I will approve all comments to ensure respectful discussion.